The purpose of the Fort Shackelford project is to determine the exact location of the fort using historical maps and documents, archaeological investigations, metal detecting, Ground Penetrating Radar (GPR), and input from the Tribal community. Recording the exact location of Fort Shackelford will allow the Tribal Historic Preservation Office (THPO) to help tell the Seminole story and continue to protect and preserve Seminole Heritage.

Fort Shackelford was built by the United States Army in February of 1855 on the edge of the Everglades (Eck 2002). The fort was created to serve as an outpost for further exploration of the Everglades during the U.S. Government’s attempt at Indian Removal in the early and mid-1850s. During that time, the U.S. Government offered land to white settlers if they remained armed and available to the U.S Army in the event of any further conflict with the Seminoles. 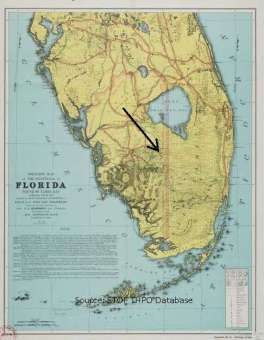 Fort Shackelford likely would have consisted of a 12 foot by 12 foot block house for the officers, and a 40 foot by 40 foot stockade type area for the enlisted soldiers and their tents (Ellis 2016). The fort was built in a wetland and occupied by U.S. soldiers during the dry season for about four months, until the rainy season arrived and flooded the area. In June 1855, the fort was abandoned with the hopes of returning during the next dry season. In December of 1855, U.S. Army Lt. George Hartsuff was tasked with assessing Fort Shackelford to determine if the fort was in good enough condition to once again house troops. Hartsuff and a small contingent of men headed for Big Cypress only to find the fort had been burned down by the Seminoles. On their return trip to Fort Myers, Hartsuff and his men were reportedly ambushed by a group of Seminoles led by Billy Bowlegs (Eck 2002). Hartsuff returned to Fort Myers and reported the attack, which ultimately renewed hostilities between the U.S. and the Seminoles. Since then, the exact location of the fort has been shrouded in mystery

In the early 1940s, government surveyor D. Graham Copeland placed several concrete markers around Southwest Florida marking historic sites. One such marker was placed by one of Copeland’s colleagues in what was thought to be the location of Fort Shackelford; but since Copeland did not place the marker himself, it is uncertain if the marker was placed in the right location (Hanson nd). Adding to the confusion, information from the Tribal Community indicates that after the marker was placed, it was moved to hide the Fort’s location from treasure hunters. Additionally, the area where the marker may have been moved to may have been “salted” to try and prevent any further looting by treasure hunters or those looking to take advantage of the Seminoles. “Salting” is basically the act of someone placing an item or items in an area where treasure hunters might frequent in hopes of tricking them into thinking they found something of value. It is uncertain if the marker was actually moved from its original location, but the idea that it “may or may not” have been moved has proven to be just as effective as actually moving the marker.

Archaeology of the Fort

Since Fort Shackelford has proven to be an elusive site, the THPO undertook archival, architectural, and archaeological research over the past year to determine if any evidence of the fort remains. Various historical maps provide a general vicinity of where the fort might be located, but with the lack of technology available in the 1850s it is almost certain that the maps are inaccurate. So where do we start? The Tribal Archaeology Section (TAS) began the investigation around the Copeland marker on the Big Cypress Reservation. Metal detection, shovel testing (systematic digging of holes in an area), and phase II excavations (placement of a 1 meter by meter hole), conducted by the TAS have all yielded several metallic items, many of which were too corroded to identify. The TAS did however locate around 12-15 square nails near the marker that date to the time period of the fort’s construction (mid 1850’s). In addition, 3 musket balls or ball shot were located approximately 100 meters (328 feet) to the west of the Copeland marker. Musket balls can be very tough to identify and are currently being re-evaluated at the THPO Curatorial building to determine whether or not they are historic or modern. The square nails provide hope that the TAS is looking in the right area, but one would expect to find more than 12-15 square nails at the site of a fort. Also, there has been a large amount of charcoal discovered during shovel testing and phase II excavations, which supports the claim that the fort was burned down. 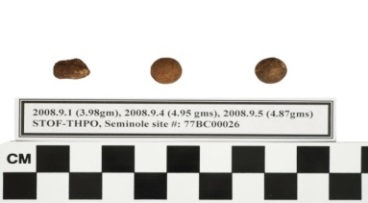 Adding to the difficulty of locating a fort in a swamp that was burned 150+ years ago is the fact that the area surrounding the Copeland marker has been farmed at least since 1968. This is apparent by the lack of irrigation canals in the 1948 aerial photograph (bottom left), and the irrigation canals seen in the 1968 aerial photograph (bottom right). According to a Tribal member, watermelon farming occurred in the fields around the Copeland marker, and this would have included the plowing of the fields. The plowing or disking needed for watermelon farming would have gone to a depth of approximately 24 inches. This would likely cause any remains of the fort to be scattered throughout the field.

Historically, Fort Shackelford represents part of the Seminole’s struggle to survive during the U.S. Government’s attempts at Indian removal, as well as the role the fort played late in the Seminole War Era. Recording the actual location, memorializing it, and presenting our findings to the Tribal Community are all part of protecting and preserving Seminole heritage. The TAS will continue to search for more nails and more charcoal in hopes of finding a large amount of both in a small area to try and locate the exact location of Fort Shackelford.